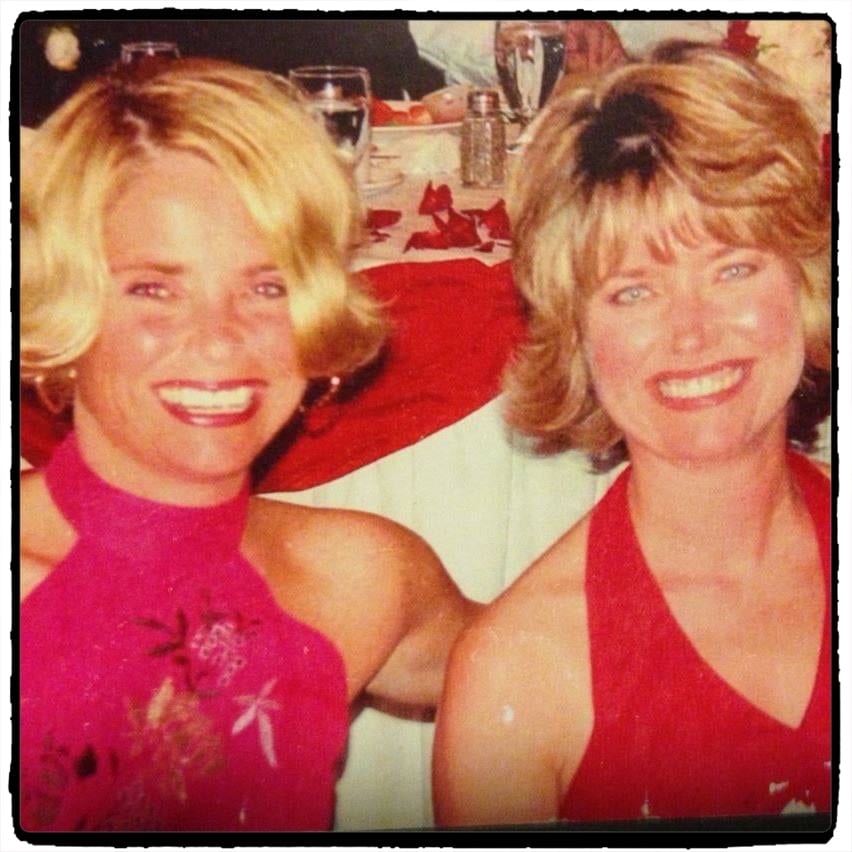 It was 2010, with the holidays fast approaching. Kathy Samuel, Karen Olson’s sister, had just finished a 45-minute phone call with Karen’s doctor. “They told me we needed to say our goodbyes to her,” Kathy said, remembering the day with vivid clarity.

She called their brother, Brian, to inform him. Seemingly, Karen’s story was coming to an end. Unbeknownst to them though, that was just the first time they would hear a seemingly imminent deadline.

“At that time [of the call], we believed she would maybe be with us a year or two. But then we started to think, “She’s going to live for years and surpass everything the stats say.”

Kathy and Brian were right to believe in their sister. Year after year, regardless of what the doctors said, Karen defied the odds.

Karen’s improbable MSA story begins in 2005, three decades after the family grew up in Ottawa, deep in the heart of Canada, in a home marked by constant laughter and a sense of togetherness. At the time, Karen worked at insurance conglomerate Sun Life. She loved her job and reveled in always being the life of the party.

“She had friends everywhere,” Kathy said. “You’d go over to her house, and all the sudden you’d have a drink in your hand, she’d pull out appetizers, she was so happy to be around people.”

But, out of the blue, issues began.

“I remember she had come out to visit me, and she was limping,” Kathy said, noting the earliest sign of trouble.

Karen first received the common misdiagnosis of Parkinson’s disease, which quickly led to the discovery of MSA.

But, while her misdiagnosis may be probable amongst MSA patients, that is where many of the commonalities end. Perhaps most improbable about her journey was her chance meeting with a man named J.P., who had visited his father at the hospital one afternoon. There, by chance, he met Karen, by then a patient beginning her journey at St. Vincent’s hospital.

What followed was an incredible, storybook-esque relationship. He was there at the hospital every single day for six years.

J.P. would arrive at the hospital 9:15am on-the-dot every day and leave at 3:45pm. He and Karen would go to the market, to the park, wherever they felt like — and even though Karen was wheelchair bound, J.P was content to push her all the way.

“They took all these pictures, all the time. I would see them on Facebook. There is my sister at the Parliament Building, downtown. There’s my sister, taking a picture with some celebrity they somehow ran into on their adventures…that’s what kept her going.”

Indeed, that is what kept her going. At one point, the doctors had recommended she stop eating. But because of J.P, Karen kept eating for another two years, sneaking treats into her room, and spoon-feeding her.

“We used to say it was like a mother feeding a baby bird!”

Kathy was always around as well. She began her blog, laughteristhebestmed.com, as a letter based journal to her sister. Every entry began with ‘Dear Sis,’ because she wanted her sister to know that she was always in her thoughts.

For years, Karen defied the doctors’ beliefs by overcoming the odds. She kept her zest for life. Even when Karen could not speak, Kathy would call and sit on the phone with her — telling stories, talking about her day. Always keeping her appraised about all the people she loved being around.

“That was when she began to transition, and that makes me sad. But I am at peace with it. It was time.”

Thankfully, she was able to go surrounded by friends and family. And, as she was celebrated in life, she was celebrated in death. With their brother’s position as a staff sergeant in Ottawa, a movie-like scene of an entire platoon, with two dozen police cars, preceded down the road enroute to Karen’s funeral. A fitting tribute for an improbable story.

Much in the spirit of that celebration, Kathy has continued her letter based blog, regularly posting and reminiscing about Karen. In addition, she holds a position on the Board of Directors for Defeat MSA/Vaincre AMS Canada, committing herself to continuing Karen’s fight against MSA.

Ultimately, a prognosis of 7 to 9 years led to a near two-decade story for Karen. “She was a true MSA warrior,” as Kathy writes on her blog. Each entry continues to be a reminder of the incredible impact Karen had on everyone she knew. Catch Kathy latest postings by visiting: https://www.laughteristhebestmed.com/ 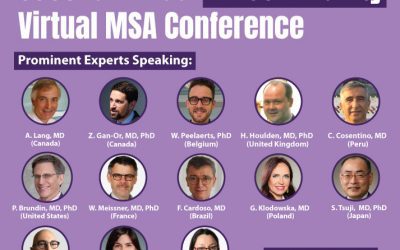 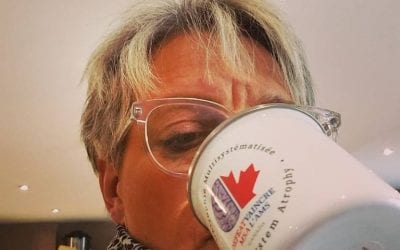 GET SOME GEAR & RAISE AWARENESS ALL YEAR LONG! 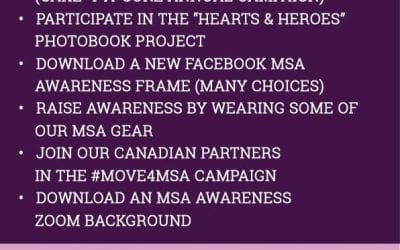 JOIN WITH US FOR MSA AWARENESS MONTH!